Theresa May triggers Article 50 to begin the process of the United Kingdom’s exit from the European Union and the first controversy is over Gibraltar! 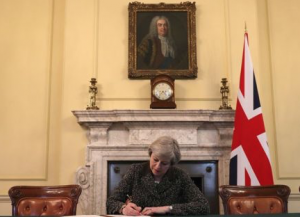 Maybe the Prime Minister was asking for trouble when she failed to explicitly mention Gibraltar in her letter to the president of the European Council Donald Tusk, formally notifying him of the UK’s intention to leave the EU.

After all, a fluid Gibraltar-La Linea border post-Brexit is a fundamental concern for the Rock. As indeed it is for the Campo, especially the ten thousand Spanish workers that cross it daily to earn their living here.

But there was no reference to this issue in Mrs May’s letter which, in contrast, did emphasise her government’s wish to avoid a return to a hard border between Northern Ireland and the Republic of Ireland.

Chief Minister Fabian Picardo understandably sought to play down the omission, pointing out that although the word “Gibraltar” doesn’t appear, the Rock is included in the Article 50 White Paper referenced in the Prime Minister’s letter. It has however been reported that Mr Picardo asked Theresa May to include Gibraltar in her Article 50 letter but she did not.

Some commentators have speculated that the failure to mention the Rock was interpreted in Brussels as a sign that the UK’s resolve to stand up for Gibraltar is not as strong as it might be. Whether this was a factor or not, the European Council’s draft guidelines in response to Mrs May’s letter state:

Naturally this has set off alarm bells in Gibraltar. But, despite the undoubted difficulties that lie ahead, I’m not overly concerned.

I was comforted by the immediate messages of support from, among others, Defence Secretary Michael Fallon, Tory grandees Lord Howard and Lord Tebbit and Shadow Brexit Secretary Keir Starmer. There are also many UK parliamentarians ready to defend Gibraltar as they have done so often in the past.

Reassuringly, Downing Street issued a press statement at the end of a turbulent weekend disclosing that the Prime Minister called Fabian Picardo and confirmed that the UK remains steadfastly committed to its support for Gibraltar, its people and – significantly – its economy. She also said that the British government remains absolutely dedicated to working with Gibraltar for the best possible outcome on Brexit, and will continue to involve us fully in the process.

These are significant pledges that, ironically, might not have been made had the EU draft guidelines not sought to make Gibraltar a bilateral issue between the UK and Spain.

As we face the challenges of Brexit I’m reminded of something Joe Bossano, then opposition leader, told me at the height of the joint sovereignty crisis. We’ll emerge from this even stronger, he said. And so we did with what we now refer to as the ‘double lock’ on sovereignty. I’m confident that, when Brexit is done and dusted, Gibraltar’s resilience will ensure that we can again look to the future with optimism.