When I first read about the mural that was going to be painted on the façade of Inces Hall I honestly thought it was an April Fool joke that had leaked. The story was published in the Gibraltar Chronicle on 30th March and the street artist responsible, whom I confess I’d never heard of, was Ben Eine.

Nothing ‘benign’ about this, I thought: it must be a prank. I soon realised it wasn’t. 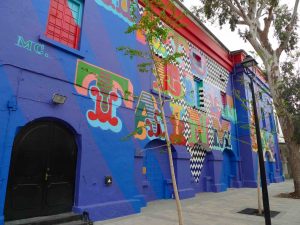 Call me a stick in the mud, but painting one side of Gibraltar’s most august playhouse shocking blue and covering it with large, garish letters that spell out a tired theatrical cliché is not something I appreciate. And I didn’t like it any better after seeing it in situ, which the government said was the best way of understanding this “popular form of public art”.

Of course art by its very nature is subjective. But I don’t see why a painting that incorporates text should be wilfully ungrammatical. The two-word message emblazoned across the side of the theatre is evidently missing an apostrophe. Arguably, it’s also missing an exclamation mark at the end. 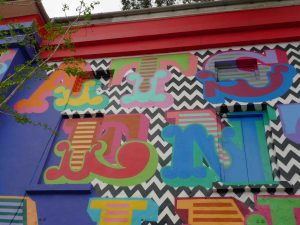 But when this is pointed out to the artist, he blithely replies that he doesn’t do punctuation marks. Why ever not? In an age of falling literacy standards why contribute to the decline?

For my part, I would have found the mural just a little more palatable if at least its inscription were in good English.

I’ve highlighted the Inces Hall project because it’s the most prominent of our apostrophe catastrophes. It certainly isn’t the only one, however. They’re rife on temporary road signs and menus in particular. 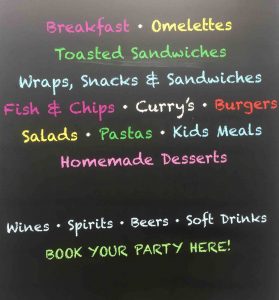 Why, for instance, does this blackboard outside a much-frequented Main Street establishment get all the plurals correct (we’ll let ‘pastas’ pass) except the one for a traditional Indian dish? There’s also a second error involving a missing apostrophe, but where exactly should it go? Answers on a postcard, please! 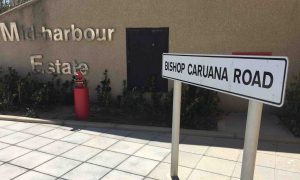 Bishop Caruana Road reminds us of the late and much-loved Roman Catholic Bishop of Gibraltar, Charles Caruana. The road is named after him but he didn’t own it. 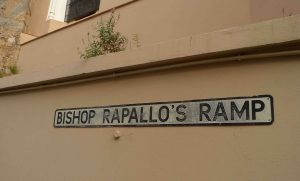 Bishop Rapallo’s Ramp, on the other hand, implies to me at least that the lane behind the Cathedral of St Mary the Crowned belonged to the first Gibraltarian Bishop, Edward Rapallo. Naturally, it didn’t.

There are numerous similar examples:

And, coming full circle, what of Inces Hall itself? It’s spelt like that on the actual building, and is commonly written as “Ince’s”. But unless the theatre was the property of the famous artificer who masterminded the construction of the Great Siege Tunnels, or a namesake, shouldn’t it actually be Ince Hall? We do, after all, have an Ince House! (In Moorish Castle Estate). 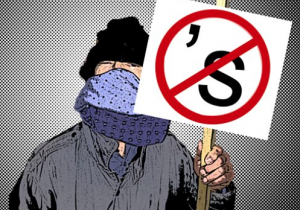 By coincidence I learned about the Ben Eine mural at around the same time that I became aware of the existence of the Apostrophiser, a self-styled grammar vigilante from the south west of England, who for the past 13 years has been patrolling the streets of Bristol at night, furtively correcting signage mistakes.

An engineer by profession, he has designed his own “apostrophiser pole” which he uses to affix a sticker over an incorrect apostrophe or insert one where required.

He was the subject of a BBC radio report.

And he even merited an editorial in The Times, which praised him for performing a public service in aid of free expression.

“Accurate punctuation”, it concluded, “begets clarity and without clarity there is only confusion.”