Dare I say it?

Power cuts that so plagued this community down the years have noticeably diminished. When there’s a failure of supply nowadays it’s usually due to planned works and Gibelec, to its credit, provides advance notice through the issuing of a press release, on its website and through social media. This allows residents in affected areas to plan ahead and not be caught on the hop.

Regrettably the system isn’t so effective when the blackout has been caused by a fault. This happened recently in various districts including the Upper Town, where I live.

I waited a few minutes in case it was a minor problem and power soon came back. When it didn’t I reached for the telephone directory to see whom to call.

Sure enough, under ‘Failure of Supply’ there were three entries: a ‘24 hour service’ office number, a mobile number and a second mobile in case the first was ‘not available.’

Dutifully I rang the first mobile number. Repeatedly. Engaged every time. Lots of people must be ringing I thought. I’ll try the other mobile. Switched off.

Ah, there’s the 24-hour number. No reply and eventually an answerphone asking me to leave a message.

After trying the two mobiles again without success I dug deeper into the phone book.

The first number listed is for an Out of Hours service for government housing. To paraphrase Monty Python’s Cheese Shop sketch: ‘An act of pure optimism to have called the number in the first place.’

Quickly call the two mobiles again in case I catch someone off guard and they actually answer.

I’d all but given up and resigned myself to having a sandwich for lunch when, surprise surprise, someone in the distribution officers’ office picked up.

He wasn’t aware there was a power cut and invited me to call the first mobile number.

‘Busy, eh?’ was the rejoinder.

‘I’ve also been trying the second.’

‘Oh, you won’t get anyone on that till after 3pm.’

To cut a long story short, I eventually managed to get through to someone on the first mobile number who explained there was a fault affecting several districts. The problem hadn’t yet been identified so I would probably have a long wait.

Power eventually came back after nearly three hours, by when I had probably digested my sandwich.

The point I’m making here is that the consumer, who pays enough for his electricity, deserves better.

I understand that there will be accidents and unforeseen problems. Hell I come from the broadcasting industry, which gets its fair share! But the system for dealing with enquiries and complaints has to be better.

Throughout the time of the outage Gibelec provided no information, at least none that I saw. I checked on their website. Nothing.

Ironically, their Twitter and Facebook feeds linked to a press release from the day before warning there would be an interruption to supply the following week, but nothing about the current (excuse the pun) failure. 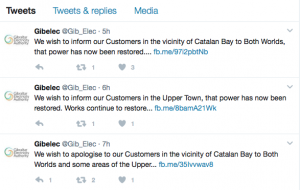 various areas, but I would suggest that a more robust mechanism for keeping the public informed as and when an event is unfolding wouldn’t be amiss.