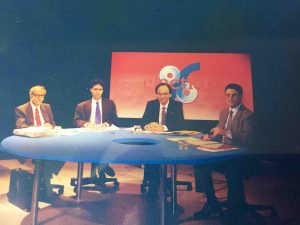 With the UK general election taking place tomorrow I thought I’d share some of my early memories of covering elections in Gibraltar.

My first, in 1988, was held amid a sense that the end of an era was at hand. Led by Sir Joshua Hassan the AACR had, except for a two-year period, governed continuously since 1945, but that was about to change. The party’s defence of the 1984 Brussels Agreement and the Airport Agreement of 1987 proved to be its death knell. When Sir Joshua quit politics just three months before the election the writing was on the wall. The GSLP swept into office, where it would remain for the next eight years.

Curiously, what has remained most vividly in my thoughts about election night, the 24th March 1988, has nothing to do with the momentousness of the occasion. It’s the argument we had at the John Mackintosh Hall theatre, where GBC’s set was, during the break at the end of our first live link-up. Things hadn’t gone to plan and there was a frank exchange of views, to put it mildly, between news editor Paul Canessa on the one hand and his deputies Clive Golt and me on the other.

It was probably just tension but I remember thinking “If he talks to me like that again, I’m going to throw him off this balcony”! Happily we all got our act together and there were no more flashpoints.

There was nowhere near as much excitement for the 1992 election. The GSLP easily renewed its mandate with 73% of the vote, almost four times as much as the GSD.

Once again it was Clive and I presenting on election night, and I still laugh to myself when I recall him trying to decipher the woefully inadequate graphics that were put up on our screens to indicate how the parties were doing. While they looked OK close-up, from where we were sitting we couldn’t read the figures and Clive was left to valiantly soldier on with commentary to the effect of: “We can see that the red line (the GSLP) is considerably longer than the blue (the GSD).” I kept mum, hoping the camera wasn’t on me to show the nervous grin I could feel creeping over my face!

In between both general elections there was a by-election in 1991 provoked by Peter Montegriffo’s decision to resign from the AACR in order to form the GSD. I chaired the phone-ins with each of the two candidates: Peter Caruana, who came from nowhere to contest and win the seat for the GSD instead of Mr. Montegriffo, and the AACR’s Douglas Henrich.

What if no one calls? I asked.

Don’t worry they will, the editor reassured.

Well they didn’t. Not for Mr. Henrich anyway.

I remember the initial feeling of anxiety as the minutes passed, the director telling me through my earpiece there were no calls yet.

And then a sudden calmness and resolve. Forget it’s a phone-in, a voice inside my head said. This is now a one-to-one extended interview, treat it as such. I did, asking whatever came into my mind, and we got away with it.

The experience of that phone-in taught me the importance of being well prepared, and I made sure I researched as much as I could for every programme I presented over the next 25 years.

I’ll finish with my recollections of the 1996 general election.

As in 1988 there was a feeling that change was in the air and the GSD would go on to overthrow the GSLP, obtaining nearly 10% more votes than Joe Bossano’s party.

Paul Canessa had left GBC in 1993 and had not been replaced when the ’96 election was called. As the most senior members of the editorial team, Clive Golt and I convened a meeting to determine our election coverage. We agreed that Clive would again be the main presenter on election night and would also chair the Leaders Debate on the eve of polling day.

This was on a Friday.

On the Sunday Clive phones to say he needs to speak to me urgently. We meet and he drops the bombshell: he’s decided to stand for election with the GSLP!

The following day I found myself in the surreal situation of covering the GSLP’s news conference to announce their line up and interviewing my erstwhile colleague as an election candidate. It also meant having to hastily rethink all the plans we’d made three days before.

I was asked to do this and enjoyed every minute. I chaired the Leaders Debate myself and introduced various innovations for election night including comedy spots and for the first time an exit poll, that accurately predicted the result.

Three weeks later I was appointed news editor, and was privileged to help organise GBC’s coverage of a further five general elections, two by-elections, three European elections and two referendums. Great fun, but I’m glad someone else will be in the hot seat next time!