When Chief Minister Joe Bossano stood before the United Nations’ Special Committee of 24 on Decolonisation on 28 July 1992 he pointed out that Gibraltar had been absent from putting its views directly to this committee for a quarter of a century.

A further 25 years have since passed. 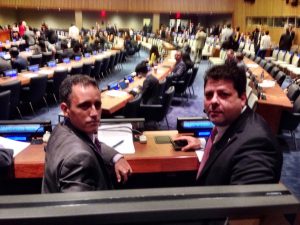 This month Fabian Picardo, Mr Bossano’s successor as GSLP leader, delivered the latest speech at the UN in defence of Gibraltar’s right to self-determination. Besides addressing the C24, the Chief Minister also goes to New York in the autumn to plead the Rock’s case before the Fourth Committee. To what avail?

Despite the best efforts of Mr Bossano, Mr Picardo and Sir Peter Caruana, who also lobbied the UN for the almost 16 years the GSD were in government, there’s been no tangible progress.

The C24 has ignored repeated invitations to visit the Rock to see the reality of Gibraltar for itself.

With slight variations, the Fourth Committee continues to adopt an annual Consensus Decision on Gibraltar that amounts to little more than an Anglo-Spanish fudge.

The UN has not recognised our right to decide our own future and, frustratingly, Gibraltar remains firmly on its list of 17 non-self-governing territories alongside places like the Pitcairn Islands and Western Sahara. This despite our updated 2006 Constitution that arguably grants the maximum amount of self-government short of independence and so meets the delisting criteria.

Are these twice-yearly trips to the UN worth it, then?

I went there many times starting in 1993 covering the interventions of all three chief ministers mentioned.

You can’t appreciate it on TV, but scant attention is paid by delegates at either committee to the words of the various petitioners. They’re more intent on putting the finishing touches to their own speeches than listening to what others have to say.

I understand and agree that it’s important for Gibraltar to continue to assert its right to self-determination and rebut Spain’s “territorial integrity” argument. But does the chief minister, or any other minister for that matter, have to physically be in New York to do that? Neither the UK nor Spain send ministers to either the Committee of 24 nor the Fourth Committee, relying instead on members of their Permanent Mission to place their respective positions on the record.

We have a government representative in New York who could perfectly well read out the chief minister’s prepared speech. In this Internet age, there’s no reason why even last-minute changes couldn’t be incorporated into the text. And if there are questions from the floor, which in my recent experience there rarely are, Number Six Convent Place could provide the answers subsequently.

The important thing is for the Gibraltar view to also be on the record and it would be, regardless of who delivers the address.

Commendably in my opinion, the government scaled back the Gibraltar Day in London events last year inviting 300 guests instead of the customary 1,000 thereby reining in costs. Further savings for the public purse, always desirable and more so in the current Brexit uncertainty, could be made through a similar initiative in respect of UN visits