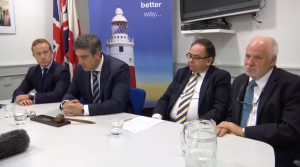 As Harold Macmillan is purported to have replied when asked what a prime minister most feared: “Events, dear boy, events”. Well, it’s events that have prompted me to interrupt my summer break and put pen to paper again earlier than planned.

Back in April in this column I mused on what I saw as the near impossibility of an independent election candidate winning a seat in parliament. I argued that the block voting system that has become so entrenched in our collective psyche militated against it. A vote for an independent, I reasoned, would be more than neutralised by the other nine votes an elector is entitled to cast.

It turns out my analysis was wrong.

An independent may, indeed, become an MP and the way to do it is simple. Just reverse the process: instead of standing for election on your own in the hope of winning sufficient votes, stand as part of a party’s line-up. If you get in, resign from the party but don’t renounce your seat. Hey presto!

Not for a moment do I doubt their sincerity about wanting to continue to serve the people of Gibraltar “freed from the shackles” of GSD membership, as Mr Llamas put it in his personal resignation statement.

And legally they’ve done nothing wrong. The Parliament Act speaks about “candidates” not “parties”, so electors are technically choosing individuals, even though the tendency is to vote for most or all of the individuals in their preferred party or alliance’s slate.

But is it morally right?

In my view the honourable thing to do in these circumstances is to seek a direct mandate from the electorate. Resign not just from the party, but from parliament too. The ensuing by-election would determine whether voters support your views, policies and actions. It would also give the party you’ve left an opportunity to reclaim the seat you vacated. After all, it would be understandable if GSD voters felt betrayed.

Given that MPs currently earn a minimum of more than 35 thousand pounds a year, this course of action would also serve to dispel any suspicion that the decision to remain in parliament is motivated more by financial self-interest than a desire to serve the community.

Incidentally, both Ms Hassan Nahon and Mr Llamas cited Daniel Feetham’s style of leadership as a major factor in their decision to quit. With Mr Feetham no longer in charge, might they return to the GSD fold?