An elephant statuette is drinking milk, they told me, get down there and investigate. Sure, I thought. And if I look out the window I might just see pigs flying. 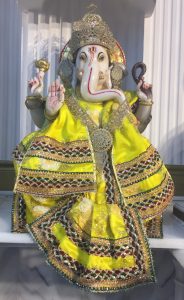 I had finished work for the day and was relaxing at home when the call came from the GBC newsroom. A “miracle” that had occurred in India that day, and spread to various countries, was also taking place in Gibraltar.

It was September 21st 1995 and worshippers at a New Delhi temple were astounded when a statue of the Hindu elephant-god Ganesh seemed to accept an offering of milk, “drinking” it through its trunk. Within a few hours there were many similar reports across the country and in Hindu communities further afield including in the USA, Canada and the UK.

I recalled this event after reading reports that a Russian MP claimed a statue of the last emperor, Nicholas the Second, began to cry on the 100th anniversary of the revolution that deposed him. Natalya Poklonskaya, a member of Vladimir Putin’s ruling United Russian party, said it was a miracle no one could explain.

As those who know me know, I’m rather sceptical about the supernatural. My expectations of a “good story” were therefore pretty low when we set off for the flat in Parliament Lane where the phenomenon was said to be happening.

Places of worship are often solemnly lit, and so it was here. The apartment was illuminated only by candlelight and full of people. I knew many of them and my presence was not seen as an intrusion. On the contrary, they obligingly made space for my cameraman and I to reach the right room. There, inside a metal bowl placed on a table, stood a figure of Ganesh one of the best known and most worshipped Hindu gods.

The statue, they said, had been drinking milk for several hours. Would I like to offer it some? Yes, I said. But privately I was a little unsure. What if it didn’t happen, how awkward would that be?

I needn’t have worried.

With everyone looking on and the camera rolling, I placed a tablespoon of milk below the effigy’s trunk and watched incredulously as the level of the liquid dropped until there was none left. I repeated the action several times with the same result. The milk unfailingly drained from the spoon. I even examined the statue to satisfy myself there was no trickery involved and found no evidence of anything suspicious. There was no mechanism or opening in the trunk through which the milk might have entered.

Scientists would later try to rationalise the event, suggesting the milk was drawn up by capillary action. Maybe so, but that doesn’t explain why all attempts to “feed” Ganesh after midnight met with failure. And while there have been reports of similar incidents since, none has had the same worldwide impact.

Was it a miracle?

Your guess is as good as mine.

All I can say is that that assignment remains one of the most memorable and intriguing of my career.