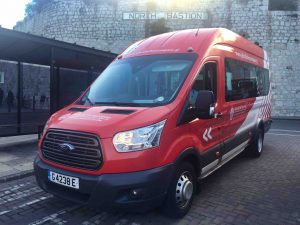 Given Gibraltar’s persistent parking problem I frequently rely on the bus to take me home. I live in the upper town, which is serviced by route one. 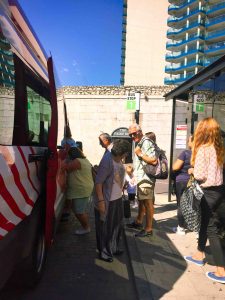 Buses on this route have seats for only 15 passengers, or 9 on those adapted to take a wheelchair. Often there are more people waiting to get on at the start of the trip than the bus has space for, so it’s not surprising that they jealously guard their place in the queue.

What isn’t right in my view is that less able-bodied passengers should have to stand because others who could easily do so don’t give up their seat. Sometimes it’s just a lack of awareness. I’ve seen groups of schoolchildren so engrossed in their mobile phones they haven’t even noticed the elderly lady with a walking stick who could really use a rest. And, in fairness, many times young people do offer to get up.

What annoys me is grown-ups who actively encourage their children to stay put. The other day a mum, her nose buried in a book, was sat with her two toddlers either side of her on a packed and swelteringly hot bus, pretending not to notice that some of the standing passengers were struggling. The younger child, at least, could easily have sat on his mother’s lap, freeing up one space.

No doubt she believed she was acting in the best interests of her boys by making their ride as comfortable as possible. But, in the long run, wouldn’t they benefit more from learning to be polite and considerate towards others? 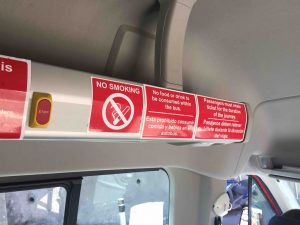 There are signs on the number one bus warning people not to smoke, eat or drink on board and asking them to retain their tickets. Indeed, I’m reliably informed that the larger buses used on other routes also have a sign asking that priority be given to passengers with mobility issues. Is it too much to ask that a similar notice be put up on the number one buses where arguably, because there are fewer seats, they’re more necessary?

Staying with the buses I’ve found most drivers to be patient, helpful and good-natured. Much more so than I would be given the situations they have to put up with, from rowdy passengers to motorists who leave their car inappropriately parked with the hazard lights on and expect the bus to squeeze through the narrowest of spaces.

Regrettably though, there are exceptions.

I saw one driver refuse to wait even for a moment while a woman pushed her wheelchair-bound husband from their front door to the bus stop just a few yards up the road. He left them stranded.

Another ticked a passenger off for supposedly not standing in the right place at the Reclamation Road stop. No matter that the bus he was waiting for was hidden by another that was stopped directly in front of it.

This kind of behaviour is unacceptable and the company should take steps to ensure that if there are any bad eggs among them, they don’t contaminate the whole clutch. 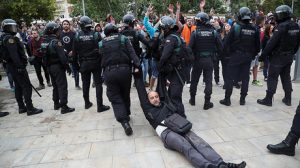 Ream upon ream has been written about last Sunday’s independence referendum in Catalonia and the disgraceful actions of the Guardia Civil to try and prevent it from going ahead. I would add just one observation that I think has been largely overlooked.

Police wear riot gear to prevent or control a riot. I followed events closely from early in the morning, and saw nothing to suggest a public order disturbance was about to happen. Certainly none had occurred, the mood was festive and peaceful: the people just wanted to vote. Yet by 9 am the police were already patrolling the streets in their intimidating attire, complete with shields, truncheons and helmets.

Perhaps they thought their imposing presence would put people off going to vote. But riot gear also ensured their anonymity. With helmets on, no one knew who they were, and they could be as heavy-handed as they liked with complete impunity.

What a contrast with the local Mossos d’Esquadra who, if they wore headgear at all, sported flat caps and berets and were identifiable by all. Three cheers for them, and for the firefighters who bravely formed a barrier between their fellow citizens and the out-of-control agents of the Spanish state.