A successful chartered accountant and banker, he gave up his position as CEO of a locally based private bank two years ago to work full time with the Gibraltar Social Democrats, of which he’s been a member since 1990.

He was thrown in at the deep end during the 2015 general election campaign when his party chose him to debate money matters on television with the formidable Joe Bossano, and was generally regarded to have held his own.

As an opposition member he’s been a constant thorn in the government’s side. Daniel Feetham named him his deputy last March, and when Mr Feetham surprised everyone by stepping down as leader for family reasons in July it was Mr Clinton who stepped into the breach, becoming interim leader as well as leader of the opposition. He donates that portion of the parliamentary salary he receives for being opposition leader to the party.

Some think, certainly his supporters do, that he’s earned the right to lead the GSD.

And yet the odds are against him: the smart money is on his rival, Keith Azopardi QC.

Mr Azopardi served two terms in government with the GSD, the second as deputy leader, but left in 2003 unhappy about its merger with the Labour Party. He later formed the Progressive Democratic Party but wound it up after it made no significant impact with the electorate at either the 2007 or 2011 general elections.

Some felt the PDP had split the opposition vote and possibly cost the GSD the very close 2011 election. Nonetheless the party has welcomed Mr Azopardi back, and its hierarchy now stands poised to support him.

Well-placed sources have indicated to me that a majority of the 25-strong executive committee, who include the party’s five MPs, intend to vote for Mr Azopardi.

Given that the executive’s vote will be weighted to be worth 40% of the value of the total number of votes cast (the other 60% will come from the votes of ordinary members at an Extraordinary General Meeting on 30 November), it would appear that Mr Azopardi already has a head start.

And that’s not all.

Unless he changes his mind, Sir Peter Caruana, the doyen of the GSD, and chief minister from 1996 to 2011, is set to publicly endorse Keith Azopardi’s candidacy. 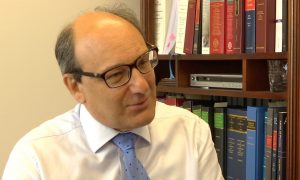 When I asked Sir Peter to confirm this he would only say that he would be making a statement about the leadership election in due course. But he added that it’s crucial for the GSD to get the choice of leader right. The electorate, he considers, won’t give the party an infinite number of chances. Get it wrong and a third party could emerge to challenge the big beasts of recent years, much as the GSD itself did when it replaced the AACR as the credible alternative to the GSLP.

Roy Clinton’s qualities are recognised and appreciated. But when it comes down to it, the upper echelons of the GSD feel the party will have wider appeal within the community, and therefore a better chance of winning the next election, with Mr Azopardi at the helm. It remains to be seen whether the membership at large agrees.

23 thoughts on “Who’ll be the next GSD leader?”