On the 2nd of November, as I predicted in this column last month, Sir Peter Caruana threw his considerable political weight behind his one-time deputy Keith Azopardi in the duel with Roy Clinton to be the next leader of the Gibraltar Social Democrats.

As the elder statesman of the GSD Sir Peter has a particular responsibility to the party that he arguably saved, following the decision of its founder Peter Montegriffo to quit politics.

Mr Montegriffo left the AACR to found the GSD in 1989 and gave up his opposition seat in parliament in the process. When he decided not to contest the ensuing by-election, Peter Caruana stepped into the breach. Much as Mr Clinton did following the shock resignation of Daniel Feetham last summer.

Mr Caruana, as he then was, won that by-election against the AACR’s Douglas Henrich and went on to secure all seven opposition seats for the GSD in the 1992 general election. The party triumphed in 1996 and Sir Peter would be chief minister for the next 15 years.

When Peter Caruana speaks, people, especially in the GSD, listen.

In his personal statement in relation to the leadership contest Sir Peter recognises the abilities of both candidates. Roy Clinton filled the leadership gap with “considerable skill” and has “masterfully articulated” issues relating to Gibraltar’s public finances. Keith Azopardi, meanwhile, was a “successful, leading minister” who “has now returned to his natural political home”.

The statement’s sting is in its tail.

Unlike his namesake Peter Montegriffo, who in his letter ruling himself out of the contest said he would support whoever emerged as the party’s choice, Sir Peter comes down unequivocally in favour of Mr Azopardi describing him as the “better and stronger of the two candidates”. 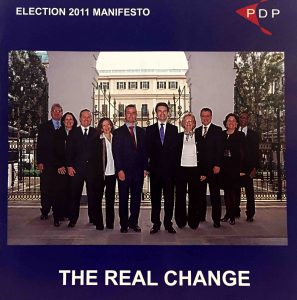 Sir Peter cites his former protégé’s “experience of party political leadership (and) of ministerial office” as important attributes. What he doesn’t mention, however, is that when Mr Azopardi was no longer under his wing and led the Progressive Democratic Party into the 2007 and 2011 elections, the PDP obtained 3.75% and 4.36% of the votes respectively and won no parliamentary seats. Had fewer than half the votes the PDP secured in 2011 gone to the GSD, the Social Democrats would have been celebrating a fifth successive term in office.

And while experience of party political leadership and ministerial office may be desirable, Sir Peter might reflect that he himself had neither when he entered the political arena seeking the electorate’s support. Just as he would have been short of “the maximum possible experience of Gibraltar’s public affairs” that he asserts the electorate expects of a chief minister.

On at least one thing Sir Peter Caruana says in his statement, though, I think most GSD members will agree. Regardless of who wins, the party would have a better chance at the next election with both Mr Clinton and Mr Azopardi in the line-up.