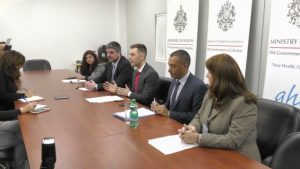 Well done to health minister Neil Costa for grasping the nettle and announcing significant reforms in the Primary Care Centre.

If you missed the story, an evening clinic between 6pm and 8pm, Monday to Friday, will be introduced. Patients will be informed of routine clinical results by telephone, saving them undue anxiety and eliminating the need to see the doctor again. More GPs will be recruited to develop a “see and treat” minor illness service to develop further the walk-in clinics that are already in place. And the length of time for which a sick note may be requested by phone has been increased from two days a quarter to a maximum of five days.

The one reform that may prove less popular is an increase in house call fees for patients less than 65 years old from £10 to £15, but considering the fee has not gone up in nearly 20 years it would be churlish to criticise it too much. Patients over the age of 65 will continue to pay just £5 and those who are exempt for social reasons will remain exempt.

Another welcome initiative is a planned increase in the number of same-day appointments. I know from personal experience how frustrating it can be to call in at precisely 8.15am when the hotline opens, be told through a recorded message that there are more than 30 callers on the line, wait your turn patiently for up to 10 minutes, and finally be informed that there are no more slots left for that morning. Try again in the afternoon or take your chances with the walk-in clinic.

Luckily when I needed a GP’s services last month, for the flu, there were just twenty people ahead of me in the queue and I was able to see the emergency doctor. Having extra appointments available should make things easier still. Congratulations to minister Costa and the GHA.

I was amused to read in the Sunday Times that Penny Mordaunt, the new international development secretary, has let it be known that she’s had “leadership training”. This in the context of a supposed plot to topple the prime minister, Theresa May, and install a ‘dream team’ of Brexiteers led by the foreign secretary Boris Johnson with environment secretary Michael Gove as his deputy.

I don’t know when she went on her course, but I saw little evidence of Ms. Mordaunt’s leadership qualities when I covered for GBC her familiarisation visit to Gibraltar as the recently appointed minister for the armed forces in August 2015. It was a time of repeated Spanish incursions into British Gibraltar Territorial Waters.

As she arrived at Number Six Convent Place for a meeting with deputy chief minister Joseph Garcia the minister refused to answer my questions, or even speak. With the media waiting outside, she sent word that she would not be making any public comments.

Imagine how that’s going to go down with public opinion here, I said. She must have had a change of heart, or received instructions from higher up, because she did eventually emerge and speak to us on the record. Maybe it was her trip to the Rock that caused the penny to drop that a little leadership training might not go amiss.