Last week I wrote about the high-rise developments that are sprouting up all over Gibraltar with the consent of a seemingly supine Development and Planning Commission. I identified Eurocity, with its three giant towers, as arguably the worst culprit of the lot. 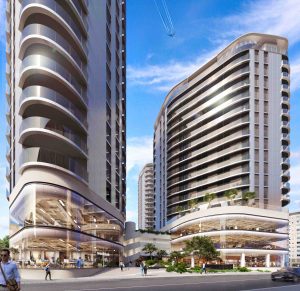 Coincidentally the developer has released new images of the project. The 70-metre-tall towers, we’re told, will have views towards Spain, Africa and the Rock. That’s great for the high net worth individuals and property investors that the “high specification apartments” are squarely aimed at but who’ll probably spend little, if any, time living in them. Not such good news for ordinary locals though, as the views many of us have enjoyed from our homes continue to be relentlessly and remorselessly obliterated.

The local agents say Eurocity “will eventually change the face of the Rock and become a benchmark for future developments.” Ominous words indeed. In true estate agent-speak, they add that the “three sustainable towers” will “punctuate” the Europort area where they’re located. What a pity the DPC didn’t full stop them when it had the chance. 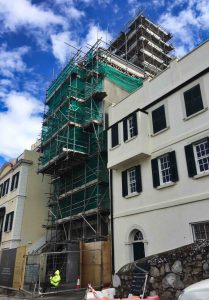 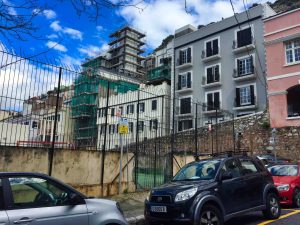 In my last column I also mentioned the Prince Edward’s Gate development. I said residents had had to put up with construction work on the site for many months. I was right. More than fifty months in fact. It’s been pointed out to me that the works have been ongoing for four and a half excruciating years with, it seems to me, little prospect of the project being completed by this summer, as advertised.

Having lived for 14 years in Morello’s Ramp, directly behind the new building, I have nothing but sympathy for my former neighbours.

Still on the subject of development, four months ago I alluded to the failed

Blue Water scheme on Gibraltar’s east side. The chief minister had just intimated on GBC Television’s Direct Democracy programme that the developers, Camoren Holdings Limited, pulled out because of economic uncertainty following the Brexit referendum, never paying the £83 million premium it owed the government for securing the site.

But the development had been announced with great fanfare in June 2015, fully a year before the referendum.

In November 2015 Camoren said it was “finalising arrangements for the payment of the premium, once the required legal documentation is completed”. The company’s chairman said they were ‘ready to commence construction works” and “land premiums will be paid in full shortly and a reasonable timeframe has been agreed for the resolution of legal documentation to be finalised”.

Why, then, did it take so long, to the extent that the development never materialised?

And where were the other interested parties that minister for inward investment, Joe Bossano, claimed were waiting in the wings if the Blue Water project did fall through?

Proof if any were needed that it’s best not to brag till the deal’s in the bag.