A few years back I received an email inviting me to submit an entry for a kind of Who’s Who of broadcast journalists. I say invited, but that’s not strictly true.

Whereas the original, and prestigious, Who’s Who itself does not charge the influential people profiled in it, my inclusion in this lesser oeuvre was conditional on buying the book when it was published at a cost of several hundred dollars. I ignored the email and was subsequently sent several reminders attempting to cajole me into signing up before the closing date. They tried again the following year, and the year after. Eventually they gave up.

Similarly as GBC news editor I received countless invitations to awards ceremonies, galas, conferences and other events, often in a far-flung African country and on payment of a “registration” or “membership” fee. I disregarded them all.

Not everyone is so wary. 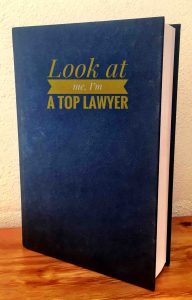 From what I’ve read it seems that legal practitioners in particular are vulnerable to what are known as Who’s Who scams and among the likeliest to want to feature in “vanity publications”. Inclusion in the latter normally just requires purchasing the book. In some cases you can also buy a shiny plaque to hang proudly on your wall. Clients will doubtless be impressed when they see how many of these publications you appear in. And if you can get the news outlets to run the relevant self-congratulatory press release, so much the better.

What brought this subject to mind was an amusing account in which the boot was on the other foot.

A legal gossip website, Roll on Friday, created a fake Nigerian law firm and its imaginary managing partner nominated the fictitious company for “Film Financing Law Firm of the Year in Nigeria” in contests which permitted nominees to invent their own category. To support his entry, he submitted a list of genuine Nigerian films for which he claimed his company had structured funding.

Two UK publishers fell for it. They both said FLF Abiola & Co (“FLF” stands for Fake Law Firm!) had been shortlisted, but the winners had not been chosen. There would have to be extensive reviews and verification of all documentation and supporting text provided before the successful firms were announced.

As Roll on Friday describes it:

“Despite the fierce competition and rigorous checks, FLF Abiola & Co was crowned ‘Film Financing Law Firm of the Year in Nigeria – 2018’ by Finance Monthly (based in Staffordshire) and Corporate INTL (a group in Birmingham), even though it did not exist.”

Both companies then tried to sell the fictitious firm advertising space in their awards magazines. Roll on Friday says that while this is not a precondition for winning an award, some lawyers go along with it to burnish their ego or to look successful to clients.

Although the laugh on this occasion was on the publishers, I’ll bet that more than a few genuine legal practices felt like mugs when the hoax, designed to demonstrate the present glut of legal awards, was revealed.