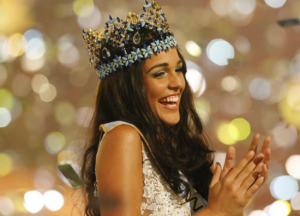 I’m sure all of us in Gibraltar are rightly proud of our very own Kaiane Aldorino. As everyone in this neck of the woods knows, the present mayor was Miss Gibraltar in 2009 and a few months later she achieved what no one thought would be possible for a representative of such a small nation when she was crowned Miss World in Johannesburg in December 2009. No mean feat, and one for which she received the highest honour Gibraltar can bestow, the Honorary Freedom of the City.

It may be that Kaiane set the bar too high, though.

In subsequent years the Miss Gibraltar pageant organisers sometimes struggled to attract contestants, with the closing date having to be extended on more than one occasion.

This year we reached the nadir.

Despite two extensions to the original closing date, a cash prize for the winner of £2,000, a clothing allowance of £3,500 and an additional £400 for the first ten confirmed contestants, as well as the chance to represent Gibraltar at the Miss World pageant in China, only three ladies had signed up by 23rd of March, the final closing date.

From those who called for a further extension and better prizes for the winners to others who considered the very spectacle of a beauty contest humiliating and degrading to women.

The ministry of culture responded with an assurance that a Miss Gibraltar 2018 would be crowned and would represent Gibraltar at the Miss World and throughout the year “as is customary”. In a statement it said it would “announce the format of this year’s selection process shortly”.

No mention, you’ll note, of an actual show, and I hope the powers that be have the good sense not to stage one. No matter how they dress it up it would be ridiculous to hold a pageant, in which there are traditionally one winner and two runners-up, when there are just three contestants. I feel bad for the three young women who find themselves in this situation through no fault of their own but the reality is that such a beauty contest, presumably televised for the entire population to watch, would be nothing short of farcical. For all I know, the girls may feel the same way.

I have a suggestion.

Why not allow the community at large to select this year’s winner?

Internet voting is commonplace these days in all sorts of contests, why not Miss Gibraltar? I’d rather our Miss World representative were chosen by her fellow citizens than the usual panel of international judges wouldn’t you? She would then truly be the people’s beauty queen.

Safeguards would have to be put in place, such as geo-blocking to ensure no one outside Gibraltar is able to vote and a mechanism to prevent people voting more than once, but I’m sure this could be achieved. Who knows, it might prove popular and supplement or even replace the judges’ role in future editions of the show.