Have you ever had that feeling when there’s been a hitch with your flight that you’re not being told the truth, or at any rate the whole story, about what’s wrong? I have, many times. The industry term “technical issues” seems to conveniently cover a multitude of sins.

It happened to me again recently. My wife and daughter were booked on the 11.30am easyJet flight to London Gatwick but were informed after they’d checked in that it had been cancelled. As had the earlier flights from the same airline to Bristol and Manchester. “Adverse weather conditions” – another useful mantra, especially to pre-empt compensation claims – was the official explanation. Which would be perfectly understandable if, as is so often the case, it had been blustery down there at North Front. But it wasn’t. Yes it was a dismal grey day, but it wasn’t at all windy. I’ve been on board aircraft that have landed and taken off in much worse weather.

Your scepticism isn’t exactly dispelled when you hear an airport official say, quite openly, that the reason for the cancellations is that the radar system is inoperative and won’t be fixed for another six weeks at least. 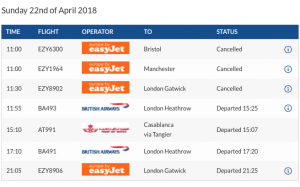 And yet radar or no radar, wind or no wind, subsequent British Airways and Air Maroc flights were able to land and depart as scheduled. Adding insult to injury, I saw with my own eyes the latter come in from Casablanca at 2.15pm just after I’d dropped my relatives off at the frontier to be taxied to Malaga airport for an evening flight to London!

Modern day air travel is highly stressful. Airport security checks are ever more stringent, airlines provide fewer and fewer services as standard, and aircraft seats and the legroom between them are shrinking all the time. When I was younger, I felt my holiday started when I stepped onto the plane. Now it doesn’t until I’ve disembarked.

Please, let’s at least be honest and up front with the long-suffering passenger when we give them the bad news that they won’t be reaching their destination just yet.

In my 2018 “wish list” column in January I highlighted the lack of parking at the North Mole Road complex where the parcel post office and other government departments and agencies were until very recently situated. The nine spaces there for the public were totally insufficient and were often occupied by work vehicles anyway. Since then the parcel office has been hastily transferred to enable works on the new secondary schools to start. 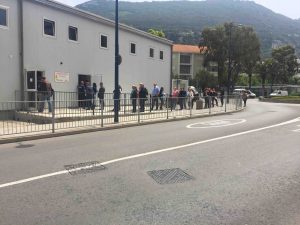 You can now find it off Bishop Caruana Road, opposite the Mid-Harbours estate. And guess what? There isn’t a single parking space! Maybe it’s part of the cunning plan to get us all to walk or use public transport. In conjunction with the shambolic residential parking scheme (Zone 2 and all that). I hear there will eventually be ten parking bays, but shouldn’t they have been available from day one?

Apparently the new location is “temporary”. But so too were the premises just vacated at Waterport when the staff moved into them, all of eight years ago.