Have you heard of Second Life?

I hadn’t until I read about it in Jamie Bartlett’s excellent book, The Dark Net.

I’m probably well behind the curve because it’s existed since 2003 and is now on the decline, having peaked in 2007 when it had one million users. At present it has around 600,000 and Facebook and Twitter are said to be killing it off.

Second Life is an online 3-D virtual world where “residents”, as they’re called, can pretend to be whomever or whatever they want. They create an avatar of themselves and inhabit an alternative world – their “second life”. Here they can interact with other avatars, go to live concerts, attend classes, build buildings and trade in virtual property and services using real money. It’s more a platform than a game as there are no set objectives and no one wins or loses: they just spend their time doing as they please. For many, it’s a release from the drudgery of their real existence.

Learning about this make-believe world 15 years after its creation made me realise how limited my knowledge and experience of the Internet are. Sure, I can browse and send an email. I know how to upload and download stuff. I even managed to create this blog.

But did I know what doxing (tracing and revealing someone’s identity), grief tourists (people who post condolences when they have no connection at all with the deceased) and flaming (insulting and provoking arguments online) were? Like hell I did.

Yes, I was familiar with Internet “trolls” (a term, incidentally, that derives from trawling and not the ugly cave dweller of Scandinavian mythology), but had no idea how complex and sophisticated trolling can be. 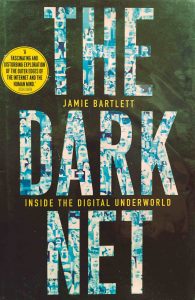 I’m about a third of the way through The Dark Net, at the point where Bitcoin is mentioned for the first time. Admittedly a lot has happened since the book was published in 2014. The author himself acknowledges that online life moves quickly, and says by the time you read it certain parts of the story will have changed. Nevertheless he asserts that the core theme, “what humans do under the conditions of real or perceived anonymity, will certainly have not”.

In its review The Spectator describes The Dark Net as “essential reading for anyone engaged with the web and the effects it is having on our culture”.

For The Independent it: “shines an invaluable light on a world that remains determinedly opaque”.

And The Guardian calls it “an intelligent and revealing introduction to the denizens of the web’s underworld”.

For what it’s worth, I recommend it too.