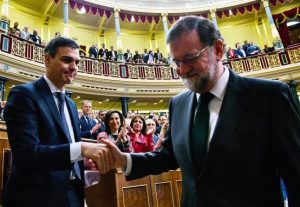 Gibraltar breathed a collective sigh of relief this month when Mariano Rajoy’s Partido Popular government was toppled in the most dramatic of fashions. After seven years at the helm, the “Teflon” prime minister, survivor of Spain’s economic crisis and corruption scandal after corruption scandal, became the first since the restoration of democracy to be ousted through a motion of no confidence. To make defeat even more unpalatable, the knife was wielded by Pedro Sanchez, leader of the socialist PSOE party, whom Mr Rajoy had comfortably beaten in the quickfire elections of 2015 and 2016.

It’s no mean feat. Under the Spanish constitution, simply mustering the required number of votes to get rid of the incumbent premier is not enough: the motion must also specify who would replace him. Mr Sanchez isn’t even an MP (he gave up his seat in October 2016 after the PSOE decided to abstain in Mr Rajoy’s investiture enabling the PP leader to form a minority government) so persuading seven other parties to support his candidacy can’t have been easy.

What happens next isn’t clear. With only 84 seats in the 350-seat parliament the socialists are extremely vulnerable. Whether Pedro Sanchez can get MPs who were united in their distaste for Mr Rajoy and the PP to now back the PSOE’s policies remains to be seen. Some pundits foresee an early general election. Whenever the election takes place, the possibility exists that the Populares will get back in. We in Gibraltar will also be nervous about what a new and therefore inexperienced Spanish administration may bring, especially in the context of Brexit.

But before worrying about any of that let’s savour the moment; it’s been a tough seven years after all. Foreign minister Margallo’s infamous “Gibraltar español” quip immediately set the tone and there was no let up. Long frontier queues in the sweltering summer heat, unfounded accusations of money laundering and opaqueness, incursions by sea and air and, unforgivably, the abandonment of the Trilateral Forum for Dialogue and the hard-won 2006 Córdoba Agreements.

There’s no doubt that, historically, relations with our nearest neighbours have been better when the PSOE has been in power. Spain may have been obliged to reopen the border in the 1980s if it wanted to be admitted as a member of the European Economic Community but, whatever the circumstances, it was a socialist, Felipe González, who finally ended the 16-year blockade.

The mentioned Trilateral Forum, which for the first time recognised Gibraltar’s own separate voice in talks, would never even have been contemplated by the PP. And without ever renouncing Spain’s objective of recovering the Rock, socialist foreign ministers, in particular Fernando Morán and Miguel Ángel Moratinos, came to earn the respect of the Gibraltarians. Chief minister Fabian Picardo even shared a platform with Mr Moratinos at a 2015 lecture in San Roque during which the ex Spanish foreign minister called for a return to dialogue.

Mr Picardo evidently sees the opportunity of an unexpected thaw in relations. In his prompt message of congratulations to Pedro Sanchez he spoke of Gibraltar’s desire to bring “dialogue, understanding and cooperation to the issues that arise between our people”. And he expressed the wish that the ideology of the new Spanish government and how it engages with Number Six Convent Place “may change”.

Early signs are good. The PSOE’s international relations secretary has said he expects a “flexible” approach from his government over Gibraltar and that the socialists are committed to a deal that prevents the border becoming an obstacle after Brexit.

A new dawn? We’ll have to wait and see.