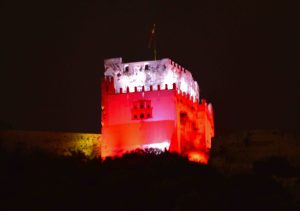 Look up at the Moorish Castle these days and you’ll see a huge Gibraltar flag hanging from it. At night the Tower is also lit up in red and white. Naturally it’s to mark our national celebrations that culminate on National Day. I wonder what Tariq ibn Ziyad would make of it: Gibraltar’s most venerable monument used as a glitzy screen? 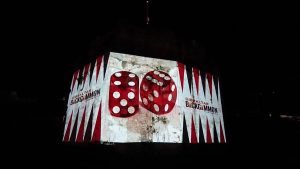 From a chess piece to a backgammon board, it’s had it all. It’s also been illuminated in all the colours of the rainbow – quite literally on one occasion. Blue is for Childline, Diabetes and Prostate Cancer Awareness. Green denotes either World Down Syndrome Day or National Cerebral Palsy Day. Yellow signifies Mental Health Week, while red promotes Cardiac Arrest Awareness. 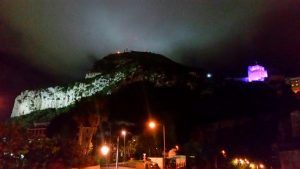 Purple, meanwhile, is for Pancreatic Cancer, Scouts’ and Guides’ Thinking Day and the Relay for Life. If it’s pink it’s Lunar Walk Day and cyan (greenish-blue) stands for Deaf Awareness.

Of course there’s nothing wrong with any of this, but I would make just two observations. Do something too often and it loses its impact. In the past if the Castle was lit up it was special and everyone would take a look. Nowadays, it’s met with a shrug of the shoulder.

Secondly it’s hard to keep track of what the different colours represent without experiencing Awareness Fatigue.

“If It’s Tuesday, This Must Be Belgium” is a 1969 romantic comedy that pokes fun at the whirlwind nature of European tour schedules. Paraphrasing, we may ponder that “If It’s Orange, It Must Be National Obesity Week” … or something. And yes, before someone points it out I know orange already marks Multiple Sclerosis Day. 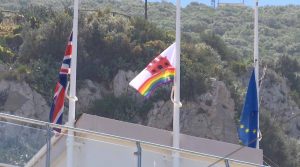 As for the rainbow illumination, that was in memory of the victims of a mass shooting at a gay nightclub in Orlando, Florida two years ago. The diversity flag was also flown at half-mast from Number Six Convent Place. 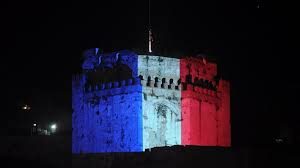 And here’s where I start to feel uncomfortable with gestures of this kind. Following terrorist attacks in Paris in November 2015 that left at least 130 dead, the French tricolour was projected onto the Tower of Homage and the chief minister and his staff observed a solemn two-minutes silence.

Four months later there was a repeat with the black, yellow and red of Belgium after 32 civilians were killed in a wave of suicide bombings in Brussels. Letters of condolence were sent to the French president and the Belgian prime minister.

But less than a fortnight before the Paris atrocities, 224 passengers and crew died when a faction of Islamic State shot down an airliner that had just taken off from the tourist resort of Sharm el-Sheikh. Why didn’t Gibraltar then stand shoulder to shoulder with Egypt and display the colours of its flag?

The attacks in the French capital (as those in Belgium) were contemptible, but no fewer than six terror incidents in 2015 were even deadlier. 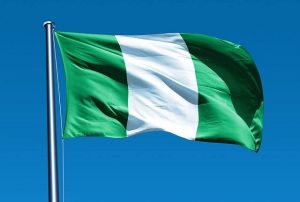 Three of them occurred in Nigeria. The worst, in January, claimed up to two thousand lives. Yet I don’t remember seeing the colours of that country officially displayed. Nor  those of Yemen, Kenya, Syria, Iraq or Turkey, all nations that lost many lives that year as a consequence of terrorism.

That’s the problem with this kind of well-meaning act. Where do you draw the line? And what happens when publicly expressing sympathy is politically awkward? When 14 civilians died in two attacks in Catalonia last summer, the red and yellow of Spain was conspicuous by its absence. Instead, the Moorish Castle’s illuminations were switched off altogether.

Come to think of it, that’s a much more respectful way to mourn the dead. Save the bright lights, if we must have them, for when we have a reason to celebrate.

Much has already been said and written about the government’s ultra-quick U-turn in blocking night-time access to its beaches webcam site, after a camera at Eastern Beach captured presumed smugglers at work on its first night.

“The beaches website is offline in the evenings exclusively as a result of issues relating to data protection which have been brought to the government’s attention by its legal advisers”, Number Six Convent Place told GBC.

Which left me scratching my head. After all, six of the ten ministers who sit around the Cabinet table are lawyers, among them two QCs: didn’t this potential danger (New) dawn on any of them before the system went live?

One thought on “Unenlightened?”