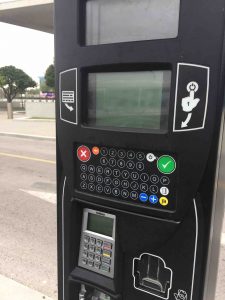 There can be few greater pleasures in life than getting the better of those imposing ticket-dispensing machines at the pay-and-display car parks managed by Gibraltar Car Parks Limited. There they stand, like the monoliths in ‘2001: A Space Odyssey’ with buttons on, and just as inscrutable. “Go on”, they seem to be saying, “ I dare you!”

My first close encounter with them was at the airport and I was in a hurry. In front of me, a tourist was trying to pay with little success. Eventually he asked someone for help; they both stared blankly at the contraption. They poked at this, prodded at that, and – gave up. The poor chap left, fuming and ticketless, muttering something in a language I was glad I didn’t understand.

At last, my turn.

I strode up confidently and soon wished I hadn’t been so smug. There I was, confronted with a front panel as complicated as the flight deck on the Discovery One from the aforementioned sci-fi flick. Where to start? My eyes were drawn towards the intimidating, 44-button, centre section.

It took me a while to suss out that you have to press the hard-to-spot white ‘start’ button to get things going. A screen lights up and instructs you to enter your vehicle’s registration number. You have to be quick, otherwise the system cuts out and you have to start all over again. (Spare a thought here for the visitor in a hire car who doesn’t know the number plate and has to go and check, in the meantime losing his place in the queue). Once you’ve overcome this hurdle you use the blue ‘plus’ and ‘minus’ buttons to key in for how long you need to be parked.

And that’s when the fun starts.

At the Ragged Staff car park on another day I tried paying in cash. Three hours, three quid. Simple. Except that my second pound coin was gulped down without registering on the screen. In the good old straightforward days if a slot machine rejected a coin it spewed it out. Not anymore apparently. It stayed in, and the only way to retrieve it was by cancelling the whole operation and starting from the beginning, re-entering the registration number. Why, pray, are so many coins rejected? Now I’m wise to the problem I carry an assortment of local and UK coins, new and old, to maximise my chances of success. But you can’t expect everyone to do this. Again, consider the hapless visitor.

Contactless payment with my debit card didn’t work either. It kept my three pounds, that I never bothered to claim back, but didn’t issue the requisite ticket. Only when I used the card in the conventional manner, manually keying in the number, was I successful, and even then authorisation took ages; I ended up being fifteen minutes late for an appointment.

I never imagined I would be nostalgic about such things, but whatever happened to the trusty old parking meter?