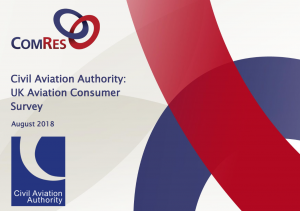 According to the latest Aviation Consumer Survey by the UK Civil Aviation Authority, satisfaction with flying among passengers in the UK has fallen in the last two years. Although the figure is still high the survey, published in August, indicates that the proportion of consumers who were satisfied with the overall travel experience in their last flight fell from 90% in Spring 2016 to 83% this Spring. I was interested, but not surprised, to read that passengers were particularly unhappy with how airports and airlines respond to disruption and delay.

Neither was it a shock to learn that passengers are typically less satisfied with the in-flight experience than other aspects of flying. It’s not that long ago the admittedly higher price of an airline ticket would buy you a hot meal and complimentary drinks. Now you have to pay for a bottle of water and hope they haven’t run out of the five-quid ‘turkey feast’ sandwiches. As I said in a previous post my holiday, which used to start when I boarded the plane, now doesn’t until I’ve arrived at my destination.

Which brings me to my latest trip.

A couple of weeks ago my son and I were at Gibraltar International Airport to take a British Airways flight to Heathrow. We’d got there in good time and were about to tuck in to a snack when a public address announcement informed us we should prepare to board. We found this odd, as it was fully an hour before the scheduled departure time of 3.20pm. We stashed our sandwiches into our hand luggage and dutifully complied, as did our fellow passengers.

Boarding went without a hitch, and soon everyone was strapped in, ready for take off. The pilot said he was hoping to get clearance so we could depart early. Again, I thought this strange: can a flight leave ahead of schedule just like that? Aren’t there ‘slots’ that have to be respected?

Sure enough the minutes went by, and there on the tarmac we remained. Not even a glass of water was offered. Eventually at around twenty past three, when we should have been taking off, the pilot again in that irritatingly insouciant tone of theirs.

Regrettably we wouldn’t be able to leave for another 45 minutes or so. It wasn’t his fault, it was down to air traffic control in France. Now, I know that French air traffic controller strikes are responsible for 33% of all delays in Europe (according to a recent French senate report), but I don’t think there was a strike. At least I found no evidence of one when I Googled it in my hotel that evening. It’s not the first time I’ve heard this excuse, and it’s starting to wear a little thin.

A lady beside me was upset because she had been about to feed her baby in the departure lounge when the call to board came. She was now stuck on the plane, unable to tend to her impeccably behaved, but hungry, daughter. The mum asked for a complaint form, so did I. Back came the reply that it wasn’t BA’s fault, we should complain to the airport. No form was provided. Another passenger was indignant because two friends had decided to travel with him at the last minute but couldn’t get a ticket as the gate had closed ahead of time.

Isn’t it high time airline passengers were treated with respect, rather than the contempt that seems to have become the norm? As we waited I saw from our window a military transport aircraft take off. As soon as it did, we were taxiing for take off. Was that the real reason for the delay? Did the MoD flight disrupt ours or was it truly down to French air traffic controllers? I guess we’ll never know.