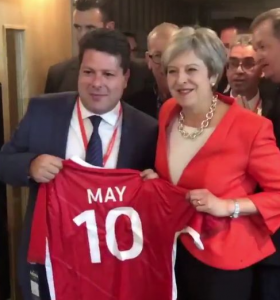 No wonder the chief minister was chuffed. For the first time, the prime minister was among MPs and other guests present at a Gibraltar government reception during the UK’s party conference season. As the Conservatives’ annual get-together was getting underway in Birmingham, Theresa May herself popped round to pledge the Tories’ support for the Rock in the approaching Brexit endgame. Cue oohs and aahs from the floor.

Introducing her, Fabian Picardo said his team had instantly got to work with Team May after the EU referendum. “We knew that Theresa May had our back”, he enthused. She was Gibraltar’s “champion” and “star striker”. Centre-forwards may traditionally wear the number nine shirt but Downing Street’s most famous denizen was “our Number 10”, and that was the number emblazoned on the back of the GFA jersey Mr Picardo gave her.

It must have been music to her ears. With Boris “Chuck Chequers” Johnson snapping at her heels and the British press openly speculating about her likely successor (Mr Johnson favourite at 4/1) the prime minister was, to her relief, among friends. It reminded me of the scenario facing her predecessor David Cameron when he visited Gibraltar just days before the 2016 referendum. By then there had been a surge in support for the Leave campaign, which was slightly ahead in the polls, and attending a mass rally of flag-waving, pro-Remain Gibraltarians would have been the ideal antidote to the doom and gloom surrounding him at home. Regrettably it was not to be. Campaigning was suspended following the murder that same day of Labour MP Jo Cox. Nevertheless it’s a racing certainty that Mr Cameron would have expressed his government’s support for the Rock. 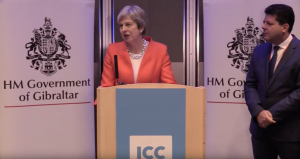 Theresa May did so too. “We back Gibraltar alongside the United Kingdom”, she said at the reception. “And as we go forward together, as Brexit becomes that reality when we leave the EU, as we forge global Britain, Gibraltar will be part of that global Britain alongside us, ensuring that you too in Gibraltar have a brighter future”.

Fine words that go down well in a public gathering. But let’s reflect on them in the sober light of day. With Brexit less than six months away, no one’s any the wiser as to what “global Britain” will look like nor, indeed, whether it will benefit Gibraltar to be a part of it. And if Brexit results in a hard border with La Línea it’s hard to imagine a brighter future. Ask any businessman.

I was disappointed by the prime minister’s references in her address to Gibraltar’s “interests” rather than its “wishes”. It’s usually Spain that, presumably thinking it knows them better than us, speaks about safeguarding the interests of the Gibraltarians (see the 1980 Lisbon Agreement for instance). The UK, on the other hand, is committed to respecting our wishes, as stated in the preambles to the 1969 and 2006 Constitutions.

Also surprising was Mrs May’s apparent uncertainty about for how long Gibraltar has been British. “I think it’s 300 years the UK and Gibraltar have stood shoulder to shoulder?” she inquires of Mr Picardo, who nods. It’s not rhetorical; check the video on YouTube. Hardly the most convincing way to go about reassuring a concerned community that your commitment to them is rock solid.

Remember too that the prime minister chose not to specifically mention Gibraltar in her March 2017 letter triggering the Brexit process, despite having privately been urged to do so by our chief minister.

For all our sakes let’s hope his confidence in her is well founded.