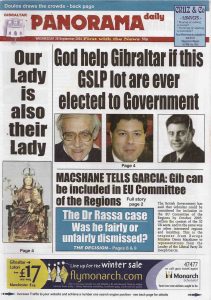 Quite a few years ago, in the pre GSLP/Liberals Alliance days, the Panorama newspaper ran a front-page headline that read, “God help Gibraltar if this GSLP lot are ever elected to Government”.

It would be the perfect headline today with “PP” in place of “GSLP”, as a return to office by the Partido Popular in Spain would surely set off alarm bells locally.

Under new leader Pablo Casado the party has moved further to the right from where Mariano Rajoy left it.

Renowned political philosopher and author José Luis Villacañas says Sr Casado’s discourse incorporates several of the reactionary tenets of the Spanish right, including an emphasis on Catholicism, the secondary role of women and a stress on the unity of the Spanish nation, while for historian Antonio Elorza, Sr Casado represents the comeback of the reactionary PP typified by a heavy hand in Catalonia and repressive legislation. Emboldened, our old foe José Manuel García- Margallo has even tried to dust down his unwanted joint sovereignty proposals.

Despair not though dear reader!

The latest opinion poll by the Centro de Investigaciones Sociológicas, the Centre for Sociological Studies (CIS), suggests that the PP and Sr Casado have their work cut out if they’re to oust the socialists at the next general election, due by July 2020 at the latest. The poll has the PSOE on 31.6% support compared with 18.2% for the Partido Popular, which has Unidos Podemos snapping at its heels less than one percentage point behind. The not-so-“Populares” have actually slipped to third in the rankings behind Ciudadanos who are on 21%. Taken together the centre-left, with 48.9% support, is nearly ten points clear of the centre-right (39.2%).

Meanwhile, asked whom they would prefer as their prime minister 25.8% of respondents chose the PSOE leader and present incumbent Pedro Sánchez. 16.9% went for Albert Rivera of Ciudadanos, while Pablo Casado and Podemos leader Pablo Iglesias were neck and neck on less than 11% each. 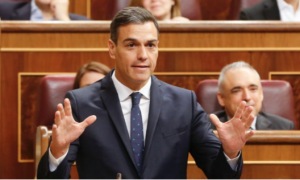 So should Sr Sánchez, who heads a minority government, call an early election? The answer is … probably not. The CIS polls aside (September’s also gave the PSOE a big lead), most others are much tighter, and one actually had the PP ahead.

And the CIS’s credibility has been questioned because the new boss, José Félix Tezanos, is a former PSOE federal executive member who was reluctant to step down when he was appointed to the CIS in June. Detractors say his methodology gives the PSOE an unfair advantage and therefore skews the results.

Nevertheless the overall trend indicates growing support for the PSOE at the expense of the PP, which may incline Pedro Sánchez to bide his time. The Catalan crisis also urges caution.

From Gibraltar’s point of view restraint is a good thing. A strengthened socialist government with a fresh four-year mandate would doubtless be welcome. But the prospect that Spain might change horses in midstream and elect a hardline PP or Ciudadanos administration, with Brexit looming, just doesn’t bear thinking about.