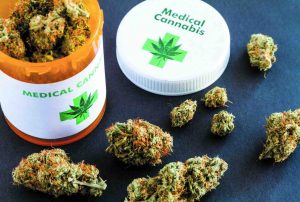 More than thirty countries around the world have legalised the use of medicinal cannabis, from Australia to Argentina, Italy to Israel. The UK has now joined them. As of 1st November nearly 80,000 specialist doctors in England, Wales and Scotland are allowed to prescribe unlicensed medical cannabis that, in normal circumstances, would be illegal (because they contain THC, the major psychoactive constituent of cannabis – what gives users their “high”).

This is not the case in Gibraltar. Here clinicians have recourse to just two cannabis-derived medicines that, until recently, were the only ones authorised in the UK: Nabilone, a synthetic cannabinoid used in the hospital to stop vomiting in patients undergoing chemotherapy and Sativex, a spray that may only be prescribed by a neurologist or specialist in the management of multiple sclerosis. Nabilone is neither routinely prescribed nor stocked in Gibraltar, while just five GHA patients are presently being treated with Sativex.

Should we emulate the UK and make more cannabis medicines available on prescription to more people, with more diverse conditions, like chronic pain or epilepsy? 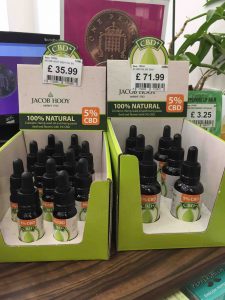 Local campaigners say we should, and that the government ought to start by allowing doctors to prescribe CBD oil. Not to be confused with cannabis oil, which remains illegal, CBD oil contains less than 0.3% THC and is not psychoactive. It’s widely available over the counter in pharmacies and health stores but is expensive. A 30ml bottle of 2.75% strength CBD costs £47.99 in Holland & Barrett while the 5% flask will set you back £71.99. Not everyone can afford it. 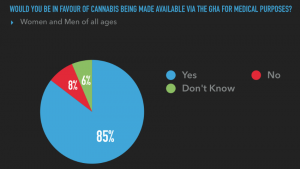 There’s little doubt that legalising medical cannabis would be a popular move. An overwhelming 85% of respondents in a February 2017 survey conducted by GBC were in favour of it, while more and more people have been taking CBD oil since its use was authorised just under a year ago. Don’t take my word for it: Holland & Barrett told me that despite the cost, it’s their best selling product.

An interesting development in the UK is that, with the advent of medical legalisation, public opinion has shifted dramatically in favour of the full legalisation of cannabis. Whereas in May, support and opposition were almost even at 43% and 41% respectively, a Populus poll last month found that 59% of the British public would now support cannabis being legal for both medicinal and recreational use. Only one third of the population think the sale and possession of the drug should remain a criminal offence and an online poll calling for cannabis to be made legal for medical and recreational purposes attracted more than 25,000 signatures.

Curiously the cited GBC poll yielded the same narrow 2% difference as last May’s UK survey, with 46% against full legalisation and 44% in favour. We can’t know whether making cannabis legal for medical use in Gibraltar would result in a dramatic change of attitude towards full legalisation as seems to have occurred in Britain. But supporters of medical cannabis will be hoping the government decides to cross that bridge if and when it comes to it.