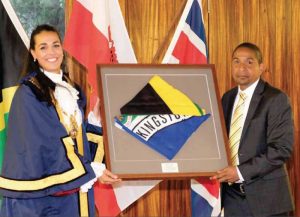 Do you know what cities Gibraltar is twinned with? Kingston, Jamaica is probably fresh in the mind as the twinning ceremony was held just a couple of months ago and attended by survivors from the two thousand strong contingent of Gibraltarians who were evacuated to the Caribbean island during World War II.

Funchal and Ballymena are sister cities of ours for the same reason. Around 2,000 evacuees spent their time away from their homeland in the Madeiran capital, while 5,000 made the journey to Northern Ireland in 1944 after it was decided that London, where they were first sent, was too dangerous.

There’s no such logical explanation, however, for our “temporary” and rather random twinning with Goole. With a population of around 20,000 this Yorkshire town’s main claim to fame is that it’s the UK’s furthest inland port, 45 miles from the North Sea. Other than its smallness and its docks it would appear to have little else in common with Gibraltar. So how did it end up associated with the Rock?

Believe it or not the answer lies in the constitutional conference that eventually spawned the 1969 Constitution. In the climate of anxiety that reigned at the time Labour peer Lord Shepherd, who chaired the conference, suggested twinning Gibraltar with a British city. He saw it as a way of reassuring a nervous population that Britain would stand by them in the face of mounting Spanish hostility. He also floated the possibility of granting the Rock the status of “Royal City”. The idea went down well, with chief minister Sir Joshua Hassan saying it would satisfy the Gibraltarians’ desire for a “special and unique civic status”.

The problem was that neither he nor Lord Shepherd fully understood what they might be getting into. Sir Joshua was reportedly under the impression that what was being offered was a unique favour, oblivious of the fact that there were already some 400 twin-town arrangements in Britain. And Lord Shepherd was soon told that Gibraltar becoming a royal city was “a non-starter”, because it might start a movement among other cities that would be hard to handle. Hopes that London could be chosen as our twin were also dashed as it was considered too big.

Instead, as reported by The Telegraph newspaper, a port city like Plymouth or Portsmouth was suggested. Neither was keen because locals saw twinning arrangements as “little more than an excuse for civic junketings”. As one option after another fell by the wayside, Goole offered itself as a ”twin”. Why you may wonder? Well, the local MP was a certain George Jeger who had personal ties to the Rock and has a block of flats named after him in Glacis Estate. Goole House in the same estate is a further testimony to the bond between the two cities in the 1960s and 70s.

A formal twinning never occurred though.

As The Telegraph said: “Given the attitude of Sir Joshua Hassan and his colleagues to the offer of anything other than the City of London, the Commonwealth Office mandarins decided that discretion was the better part of diplomacy”. To this day Gibraltar remains untwinned with any British city.