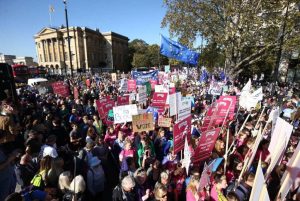 Call me a fantasist but I have a sneaking feeling, maybe it’s wishful thinking, that the UK – and with it Gibraltar – may yet avoid crashing out of the European Union. I remember the mood of despondency among my GBC colleagues when the result of the Brexit referendum came through the morning of Friday 24 June 2016 and it started to sink in that despite Gibraltar’s 96% vote to “remain” the UK as a whole had voted, narrowly, to leave. I shared my newsroom friends’ trepidation, but nevertheless a tiny voice in my head said: it can’t happen – surely MPs will come to their senses when they realise what exiting the EU means?

I’m not sure that’s what’s occurred but it’s looking increasingly likely that the House of Commons will reject the withdrawal agreement that prime minister Theresa May brought back with her from Brussels and in so doing, put paid to the Gibraltar Protocol and associated Memoranda of Understanding that have so occupied our minds in recent days.

Labour, the Liberal Democrats, the Scottish National Party and Northern Ireland’s DUP, on whom the Conservatives rely to govern, have said they’ll vote against as will around a hundred Tories, unless Mrs May and her whips can persuade them otherwise before next Tuesday’s “meaningful vote”. The prime minister is trying to drum up support for her deal with voters hoping they will urge their constituency MP to support it, but the initiative seems to have backfired, with critics describing it as a desperate move. An online poll by The Times and the Sunday Times suggests that three of every four readers would like their MP to reject the Brexit deal.

With the country facing a possible “no deal” scenario, the idea of a second referendum is gaining currency. At the weekend another minister resigned over what some sectors of the British media are taking to call the “Brussels agreement”. (Not, I daresay, because it’s as unpopular as its 1984 namesake was in Gibraltar, but you never know!)

Sam Gyimah, the science and universities minister, who’s tipped as a future Conservative leader, stepped down saying the plan is not in the national interest and that voting for it would mean the UK surrendering its voice, its vote and its veto. Mr Gyimah asserted that the public had no idea what Brexit meant before the referendum and that the only way of legitimising the UK’s departure was to hold a second vote. His resignation brought to seven the number of government ministers who’ve quit since the draft withdrawal agreement was made public in mid November.

Meanwhile Labour appears to be edging closer to adopting a second referendum as policy. Ideally the party would like to force an early general election, but shadow Brexit secretary Sir Keir Starmer says if that fails Labour will seek parliamentary support for a people’s vote instead. In that eventuality he considers voters should be given the choice of staying in the EU. Sir Keir is among a group of shadow cabinet members, who include deputy leader Tom Watson and shadow Northern Ireland secretary Tony Lloyd, that is pressing Jeremy Corbyn to prepare to campaign for a second referendum.

And that’s not all.

The LibDems and the Green Party both want a people’s vote. A cross-party group of 17 influential MPs from constituencies that voted both Leave and Remain in the referendum have signed a letter calling on “all party leaders and parliament to trust the people with the final say so we can face the future united”. They say the people must be given “their rightful seat at the table”. And on Monday two petitions with over a million signatures calling for a second referendum were handed in at 10 Downing Street. Even Theresa May, for whom the mere mention of a second referendum was once taboo, now openly cites it as one of the options, alongside “her” deal and “no” deal.

Locally, the GSD opposition has said it would welcome a fresh referendum and chief minister Fabian Picardo is also beginning to talk about the possibility of having one. On Viewpoint last week he said that if it comes to a second vote, people should hold their noses and vote remain once again even though the institutions of the EU have behaved “abominably” towards Gibraltar.

There is, of course, no guarantee that the outcome would be reversed. For all we know the Brexiteers would win again, but somehow I don’t think so. Nearly three quarters of a million people demanded a Final Say when they marched through London in October and opinion polls consistently indicate that the electorate wants another opportunity. A YouGov poll published last Sunday showed support for staying in the EU at the highest level recorded by the company since the 2016 referendum: 55% compared with 45% for leaving.

Holding a second EU referendum would be controversial and fraught with difficulties. But for Gibraltar, as much as for the UK, it might just be the best way out of the Brexit quagmire.

(First published as an opinion piece in the Gibraltar Chronicle of 5 December, 2018)