The Metropolitan Police was the unlikely harbinger of Christmas cheer when it made public a selection of the funniest “emergency” calls it received in the year to 30 November.

Among the genuine 999 calls were a man in a stew because it was taking too long for his lunch to be served at a London pub and a woman who complained that her bus driver had been whistling throughout her journey. “What if everybody starts whistling or singing in the bus?” she fretted. Meanwhile, someone rang simply to say Happy New Year, while a prankster claimed that KFC had run out of chicken. He quickly hung up though when they told him they could see from where he was phoning.

The officer in charge of the Force’s call handling wasn’t amused. Chief Superintendent David Jackson pointed out that nuisance calls take away police resources at a time that police numbers and funding are stretched. The Met received more than two million emergency calls in the first eleven months of 2018 of which nearly 22,000 were time-wasting calls.

“Imagine if one of your friends or loved ones was in need of the police as quickly as possible and it turned out we could not help because we were having to deal with one of these hoax calls – I’m sure that you, like us, would be devastated and extremely annoyed”, Mr Jackson sniffed. 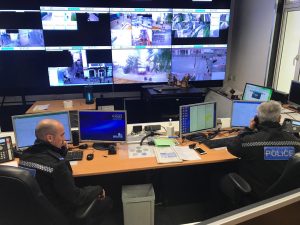 It’s a problem that afflicts the Royal Gibraltar Police too. Between October 2017 and March 2018 the RGP’s control room received more than three thousand supposedly urgent calls, but only one in six was deemed to be an emergency requiring an immediate response.

Not to mention people dialling 199 just to ask the time or whether it’s raining.

Like his UK counterparts, Commissioner Ian McGrail will be hoping for far fewer dud calls in 2019.

Happily a couple of them came true: government projects cannot now go ahead without the approval of the Development and Planning Commission, a 2011 GSLP/Liberals election manifesto commitment finally honoured following the introduction of the Town Planning Act in August. And the parking situation at the parcel post office has greatly improved with the facility’s move from the North Mole to Europort.

Still no delivery, though, on another 2011 pledge: a sewage treatment plant. A contract for one was “placed” in October 2014 and last January an Advanced Works Contract was awarded. I asked the government about the delay in getting this project off the ground and was told that construction is expected to begin when the Environmental Impact Assessment is completed and contractual negotiations have been finalised.

While these are “currently programmed” during the first quarter of 2019, we could probably do worse than hold our nose, rather than our breath.