A family custom we fastidiously observed when I was still living at home with my parents and siblings was to listen to the local lunchtime news on Radio Gibraltar. Much as Brexit now worries us, in the late 1970s we were concerned about what the future held for the Rock in the uncertain post-Franco era.

Initial optimism that the death of the Spanish dictator in 1975 would lead to improved relations and a swift reopening of the border soon subsided. The Strasbourg process that began in 1977 resulted in little more than the restoration of telephone links, and it gradually began to dawn on us that newly democratic Spain might seek to exact a sovereignty price for reopening the frontier gate.

It was against this background that Foreign Office minister Sir Ian Gilmour was despatched to Gibraltar in July 1979 to put across directly to the Gibraltarians the views of the recently elected Conservative government of Margaret Thatcher. Many drew comfort from his comment that Her Majesty’s Government considered the continuing Spanish restrictions to be “unjustifiable”. But it was another word he used, as reported by GBC in that 1.30pm radio news bulletin, that sat ill with me: the minister said it was “inconceivable” that the frontier should remain closed in an enlarged European Economic Community.

Spain had already applied to join the EEC and the UK had said it would fully support the application, irrespective of the Gibraltar dispute. Therefore, Sir Ian’s apparent linking of European Community membership with the lifting of restrictions did not go down well in Madrid. But what stuck in my mind was that word “inconceivable”. If you really mean “impossible” why not say so? After all, what’s inconceivable today may be quite feasible tomorrow. Just ask Theresa May. The frontier of course did eventually reopen, but not for another five and a half years. 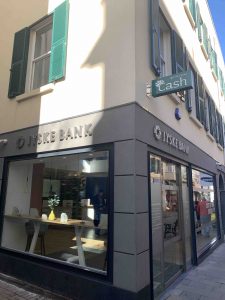 What evoked this memory was the announcement by Jyske Bank that it intends to sell its Gibraltar subsidiary. There are no longer, the bank said, “any crucial synergies between the operations in Denmark and Gibraltar … (nor) the same strategic match between the subsidiary bank and the Group”. But another factor was the risk posed by Brexit. Gibraltar, Jyske’s statement added, “will follow Britain out of the European Union and may be subject to legislation different from the rest of the Jyske Bank Group”.

Yet, shortly before the European Union referendum, the bank was upbeat about the future of its local operation regardless of the outcome of the referendum. In an interview with me in March 2016, CEO Christian Bjørløw said Jyske had diversified over the years and was well placed to survive a Brexit. “I’m not afraid for our operation at all” he asserted, before concluding that the local subsidiary was “as solid as the Rock”. There’s “inconceivable” for you. By the way, the interview is still available on YouTube.

It’s been rather an inauspicious start to the year hasn’t it?

Here’s hoping that, as per the title of D:Ream’s smash hit (Labour’s 1997 election campaign song, incidentally): Things Can Only Get Better.