When it comes to construction in Gibraltar, is the sky the limit? 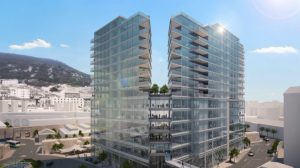 The latest proposal to go before the Development and Planning Commission is for a 15-storey, multi-purpose building at Devil’s Tongue. Admittedly the area is rundown and crying out for a facelift, but … 15 floors?

If approved, it would be one of the tallest buildings in the area.

Isn’t it funny how developers would have us believe their aim is to improve our lives rather than their bank balances?

In their presentation to the DPC, the architects said the development would maximise space, vistas and existing structures, whatever that means.

It would also, apparently, improve traffic flow even though access to Queensway from Waterport would be cut off. 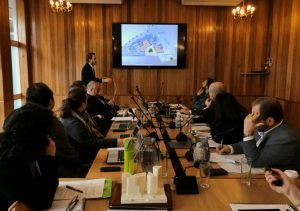 At the DPC meeting the town planner pointed out that the road they were proposing to close is a major artery for long vehicles and that the highway authorities have said the proposed turning circles for such vehicles do not work. “We are not saying we are traffic consultants” was the grudging confession.

The venture would bring employment and “good quality housing to the area”. Unlike the hovels the neighbours live in, presumably.

And, of course, it would enhance quality of life.

Tell that to the 141 residents of Montagu Crescent who signed a petition opposing the plan or the 13 other objectors who wrote in detailing their grievances.

Oh, and there’s the “possibility” of a park, although after probing by environment minister John Cortes it turns out the so-called “Linear Park” is not actually part of the proposal but something that would be nice to have. If someone else pays for it, no doubt. A park here and a green roof there and with luck we’ll get planning permission, seems to be the common tactic.

The Devil’s Tongue project is just the latest in a long line of controversial buildings loved by some, hated by others.

One that falls into the latter category for me is Prince Edward’s Gate, an apartment block situated near the Hargraves playing area on Prince Edward’s Road that’s (optimistically) due for completion this summer. How this got past the DPC beats me. Appropriating the name of the historical 1790 archway in Charles V Wall just up the road is already bad enough in my book.

But the structure has been shoehorned into the tightest of spaces, dwarfing existing buildings and making life a misery for nearby residents who’ve had to endure noise, dust and general inconvenience for many months only to be deprived of light and a view in exchange. 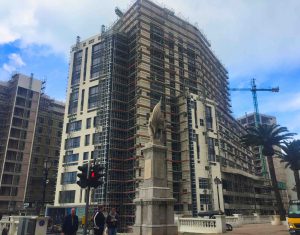 Meanwhile, Midtown isn’t so much a blot on the landscape, as the landscape itself for anyone unfortunate enough to live under its towering presence. Did you know, by the way, that the two behemoths that comprise it will sprawl over 18 thousand metres squared?

That’s the equivalent of 25 football pitches in a footprint where, until recently, we had just two.

Were you aware that the zones in the residential Liberty Building overlooking Queensway will incongruously be named after American cities: Boston, Madison, Lexington, Burlington and Arlington? And that whereas the original scheme presented at the time of the GSD government included a public park, the Midtown website depicts “private gardens”? No sign either of the school that was supposed to be provided. 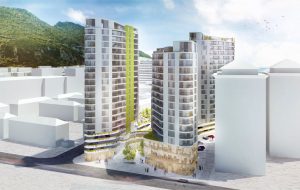 Arguably taking the biscuit is the Eurocity project that was approved last year. It consists of three towers of 22, 21 and 17 floors, the tallest stretching to 70 metres. By way of comparison Constitution House and Referendum House in Glacis, the tallest residential buildings in Gibraltar when they were built, are each 50 metres in height.

Now, I know that space in our tightly packed community is very limited and we have to continue to build flats and offices for locals as well as foreigners who work here, many of whom have to rent in Spain. But if we carry on like this we’re in danger of destroying forever the character and charm that make our city so special.

30 years ago the first GSLP government substantially increased Gibraltar’s landmass through the Westside land reclamation programme in the harbour. Maybe it’s time to repeat the exercise.

4 thoughts on “No Tall Story”