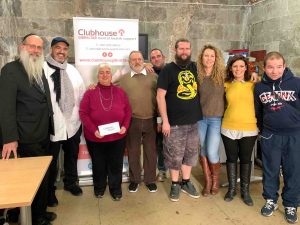 I declare an interest: I’ve just joined the board of trustees of Clubhouse Gibraltar. My only interest, mind, and it’s shared I’m sure by the other trustees, staff and members, is that this selfless organisation continues to flourish, as it provides ever-growing support to members of our community with mental health issues. The next target is new premises.

After operating for a couple of years from Toc H, where the dampness was affecting people’s health, Clubhouse were allocated “temporary” premises in Wellington Front in September 2013. It was supposed to be for one year only, to free them from what CEO Emily Adamberry Olivero describes as the “terrible conditions” they were working under, but five years on they’re still there. Plans to accommodate them in Rosia Road never materialised despite the keys to the intended premises having been handed over by the government and the Clubhouse logo being prominently displayed at the site.

This time though, it seems the move is actually going to happen. At the end of 2016 Clubhouse were told their permanent home would be at 304a Main Street, where the Gladys Perez centre is now, a stone’s throw from the residence of their recently appointed patron, Governor of Gibraltar Ed Davis. The Development and Planning Commission approved the plans, and GJBS is poised to carry out the necessary works. As far as the charity is concerned, the sooner it happens the better: with 160 current members Clubhouse badly needs more space. While the government has said it will meet the construction costs, extra funds are needed for things like furniture and equipment and to expand the services offered. The new premises will have a working kitchen and cafeteria, for instance. 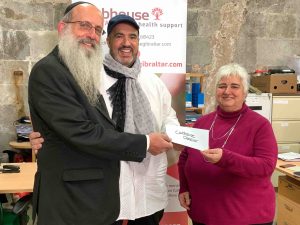 One local entrepreneur has already dug deep into his pockets. Jimmy Attias has handed Clubhouse a cheque for £30,000 – the largest single private donation the charity has ever received. (Mr Attias has also generously donated £30,000 to Gibsams). At the presentation he urged others to follow his lead; the business community will soon have an opportunity to do so. Clubhouse are organising a fund raising Gala Dinner at the Sunborn Hotel in June, and will be asking companies to support the event, which will include an auction and a guest speaker.

After agreeing to become a trustee I was given an initial briefing by Emily and her team. I was bowled over by their dedication, and everything they do. Did you know that besides preparing and training members to get a job through their work-ordered day programme, they also provide after-hours support for carers and people who want to talk about depression and anxiety? Organise outings both locally and across the border? Produce a monthly, members-only newsletter? Run mental health first aid courses? They even have a reach-out programme to visit people at home, in prison or in hospital.

In a testimonial video on their website the Governor describes Clubhouse Gibraltar as a “compelling and inspiring example of the inclusive and mutually-supporting Gibraltarian community that goes out of its way every day to look after people in need”. I wholeheartedly agree. It provides an invaluable service, worthy of everyone’s support.